Proton beam therapy is a radiation therapy that makes use of a type of radiation called a proton beam.

Photon beams are waves of light, which are used in conventional radiation therapies such as X-rays, gamma rays, and so on.

On the other hand, particle beams accelerate particles, such as hydrogen and carbon nuclei. A hydrogen atom consists of a positively charged proton and a negatively charged electron revolving around the nucleus. The hydrogen nucleus (proton) is removed from the nucleus and accelerated to produce a proton beam. The therapy that uses such proton beams is referred to as proton beam radiation therapy. 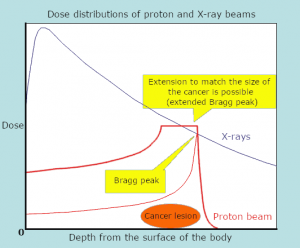 With X-rays used in conventional radiation therapy, when they are delivered in one direction from outside the body, the radiation dose is absorbed closest to the surface of the body and gradually decreases with depth as shown in the graph below.

On the other hand, it is a property of a proton beam that the radiation dose reaches its peak at a certain depth (the Bragg peak) according to the velocity (the amount of energy). Thus, by adjusting the amount of energy and so on, the dose can be made to peak at the cancer lesion. Furthermore, the proton beam stops right behind the Bragg peak and does not go deeper, ensuring that it will not irradiate healthy tissue behind the cancer lesion.

The figure above shows a schematic diagram of dose distributions when beams of radiation are delivered from one direction. A high dose of X-ray radiation (left) is given to an area shallower than the cancer lesion, indicating that deeply located organs at risk (organs that are at a higher risk of problematic side effects due to radiation exposure) are also irradiated. With a proton beam (right), it is possible to reduce the irradiation dose to be delivered to the area shallower than the cancer lesion, and not to irradiate deeply located organs at risk at all.

In other words, when using a proton beam, we can concentrate radiation on the target cancer lesion and reduce the volume and dose of radiation reaching the surrounding normal tissue by taking advantage of the physical properties of the proton beam, which can be expected to improve treatment outcomes and reduce side effects. Positive treatment outcomes equal to those of surgical procedures have already been reported in cases of prostate cancer and liver cancer.

Because proton beam radiation imposes little physical strain, radiation therapy can be provided relatively safely to individuals in poor general condition for whom surgery is difficult to perform as well as elderly patients.

A single treatment session takes about 20 to 30 minutes including time for adjusting the position. The patient is asked to just lie still on a bed and will not feel any pain during that time. These treatment sessions are administered once a day and the patient needs to complete a planned number of sessions (8 to 39 sessions, depending on the condition of the cancer and so on). Hospitalization is not required to undergo proton beam therapy. Since the patient does not experience much physical strain and can be treated as an outpatient, it is possible to continue working while receiving proton beam therapy.

In addition, since the shape and function of the patient’s body will not be changed, the patient can maintain good post-treatment QOL (Quality of Life) and continue to live in the same way as prior to treatment. 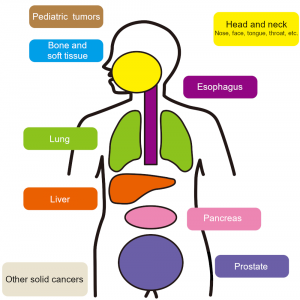 * In some cases, even the cancers listed above may not be treated with proton beam therapy.

Things you need to bring with you before your treatment 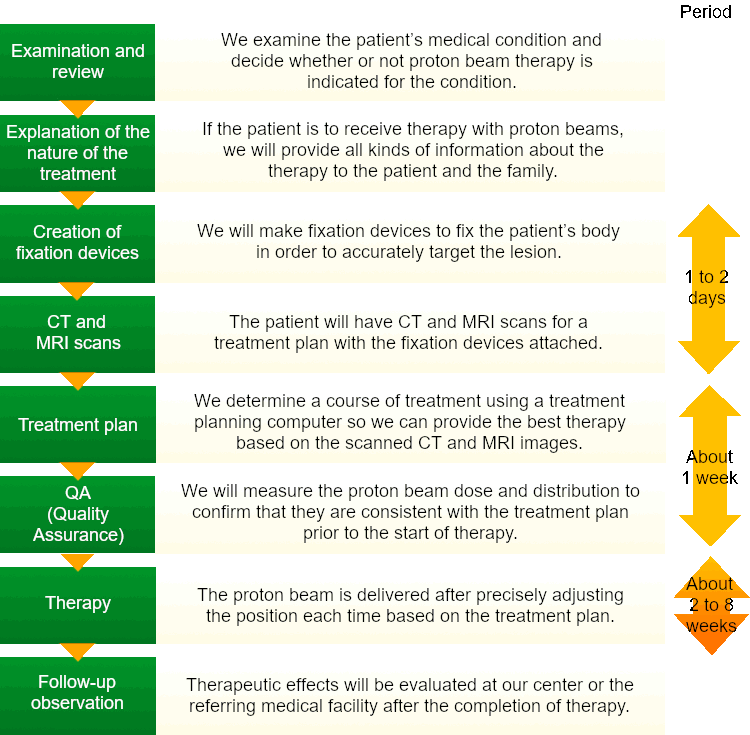 * The process shown above is the standard treatment procedure, which is subject to change.

About information and procedures regarding medical care services

In our hospital, all communications including information about treatment are made in Japanese. Patients are required to arrange an interpreter for themselves as needed.

In addition, our hospital does not perform any procedures other than those related to medical care for patients. Thus, patients need to perform various other procedures for themselves.

Patients are required to pay separate fees for tests, prescriptions, and so on, depending on the treatment received, in addition to the cost of proton therapy.

The number of treatments (fractions) is medically determined according to the type of cancer, tumor size, medical condition, and so on.

Examples are shown in the table below.

The personal information that you provide to us in this form will be used only for the purpose of responding to your questions or inquiries about indications for proton beam therapy. Furthermore, such information will not be released to a third party without the person’s permission (except for our hospital’s contractors).

Languages ： English, Chinese, Russian and others 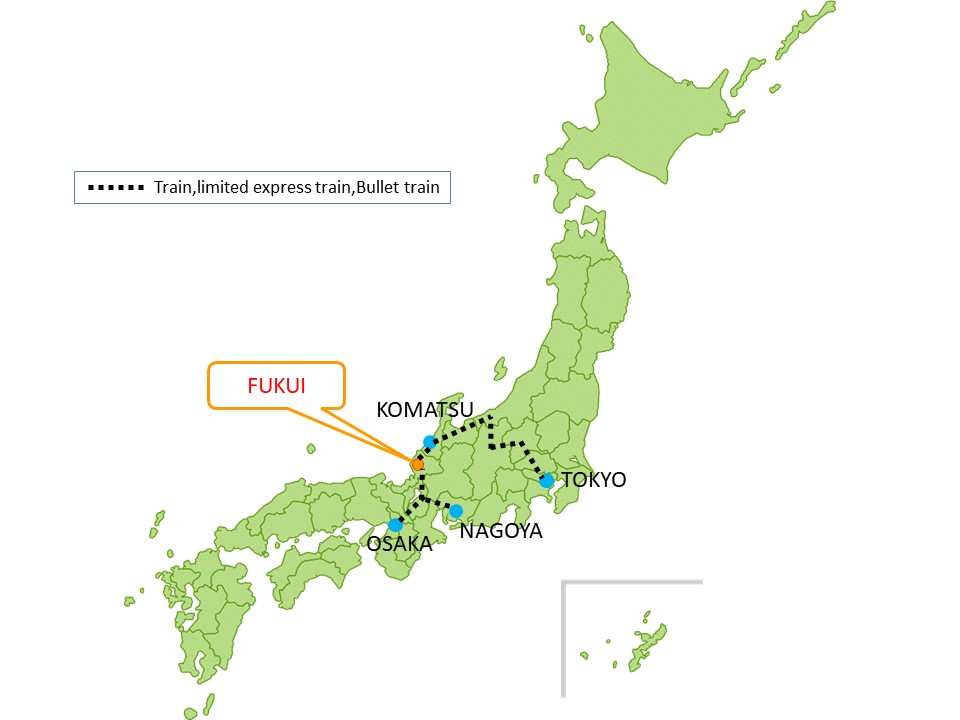 From Osaka to Fukui

From Tokyo to Fukui

From Nagoya to Fukui

From Komatsu Airport to Fukui